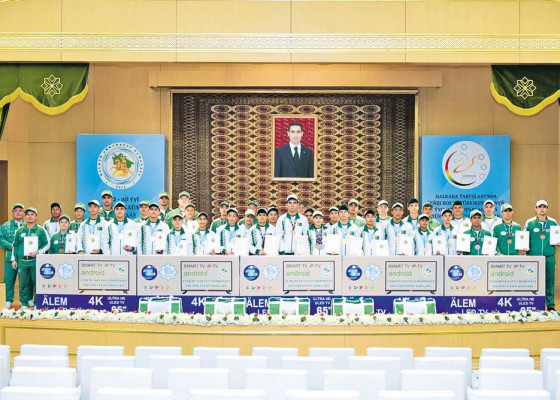 President Serdar BERDIMUHAMEDOV: “Sport is a Source of Health and Harmony”

Honouring the Winners of International Tournaments Takes Place in Ashgabat On behalf of President Serdar Berdimuhamedov, a ceremony was held in the Turkmen capital to honour athletes who had won prizes in recent major international competitions – the 7th Children of Asia International Sports Games, held in the city of Vladivostok, Russian Federation, and the 5th Islamic Solidarity Games in the city of Konya of the Republic of Türkiye. 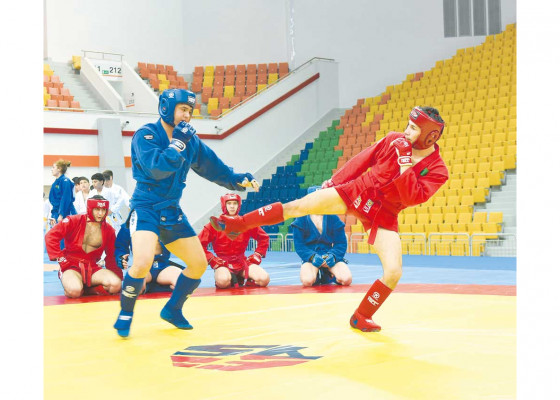 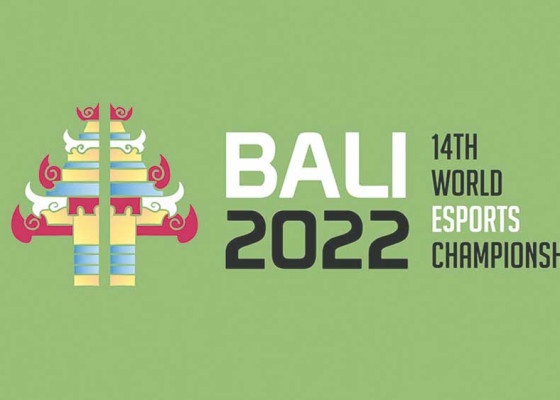 Galkynysh Esports to Perform at the e-Sports World Championships

The national selection for the DOTA 2 discipline for the World e-Sports Championships, which will be held under the auspices of the International e-Sports Federation (IESF), has ended. In total, 21 Turkmen teams took part in the qualifying tournament. The four best gamers’ teams in the country met in the playoffs of the tournament to compete for the opportunity to represent Turkmenistan at the World e-Sports Championship. The first game of the semi-final was between AT Cybersport and Jelly Fish. AT Cybersport turned out to be head and shoulders stronger and left no chance for the opponents, winning with a score of 2:0. 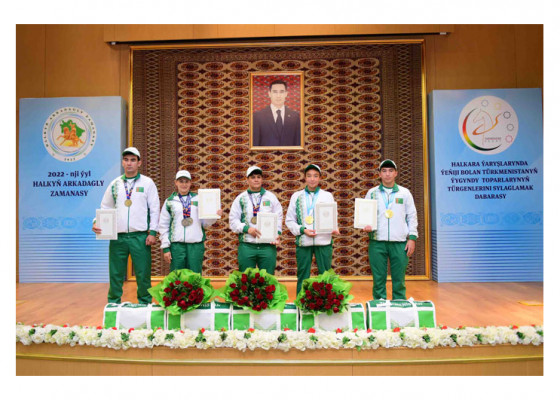 In honour of Turkmen athletes

On August 31, 2022, a solemn ceremony in honour of the members of the Turkmenistan national team, who won the international tournaments, took place at the Sport Hotel in the Ashgabat Olympic Town. On behalf of President of Turkmenistan Serdar Berdimuhamedov and the Gurbanguly Berdimuhamedov Charitable Foundation for Assistance to Children in Need of Guardianship, the athletes, who upheld the honour of the country, received valuable gifts. 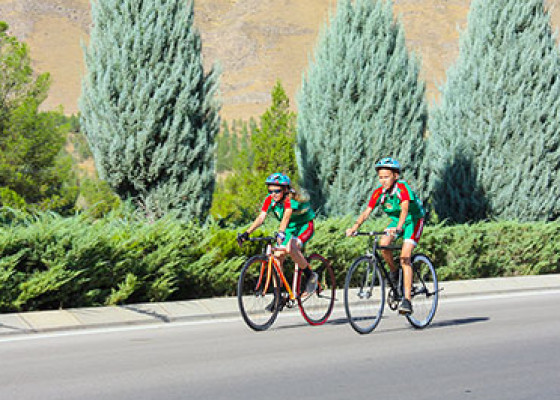 «7/24. tm»,&nbsp;№ 35&nbsp;(118), 29.08. 2022 The other day in Ashgabat, in the picturesque foothills of the Kopetdag, the championship of the country in cycling on the highway ended. The tournament was organized by the Cycling Federation and the Ministry of Sports and Youth Policy of our Turkmenistan. 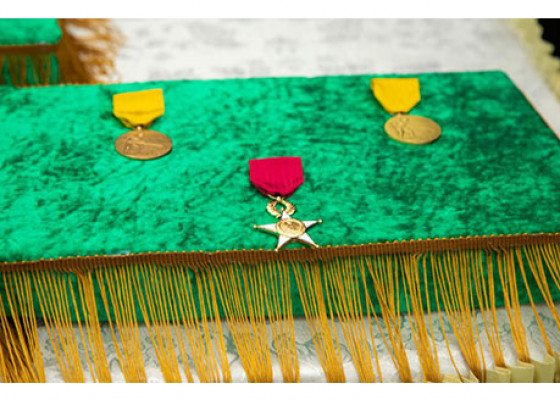 Cameroonian sambists received state orders from the president of the country 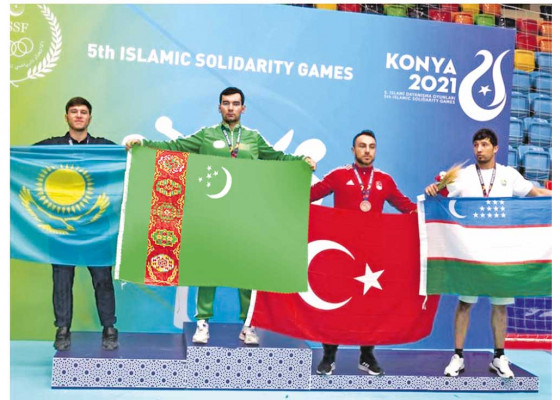 International Triumph of Our Athletes

The Turkmenistan national team made happy sports fans in our country with a great number of medals of the 5th Islamic Solidarity Games, which were held in Konya, Türkiye. The Games illustrated the high level of the development of Turkmen sports. Our team ranked 12th in the standings of the Games, at which more than 4,000 athletes from 56 countries performed. The Turkmen athletes won 23 medals (4 gold, 6 silver and 13 bronze medals). It should be noted that the Turkmenistan national team won 13 medals (2 gold, 4 silver and 7 bronze medals) at the 4th Islamic Solidarity Games, which were held in Baku in 2017. This progress testifies to the successful sport policy, initiated by the Hero-Arkadag and worthily continued by Arkadagly Serdar. It was Ziyamuhammet Saparov (a bronze medal in the under 125 kg category of the freestyle wrestling tournament) and Yulduz Jumabayeva (weightlifting) who won the first medals for the Turkmenistan team. Yu. Jumabayeva is the medallist and record holder of the World Championships, which were held in the capital of Turkmenistan in 2018. Our compatriot, a coach at sports school 1 in Gurbansoltan eje etrap, Dashoguz velayat, performed in the under 49 kg category. She lifted 74 kg in the snatch, 93 kg in the clean and jerk and 167 kg in the combined event, which brought the talented athlete three bronze medals. Duygu Alici and Sazie Erdogan from Türkiye 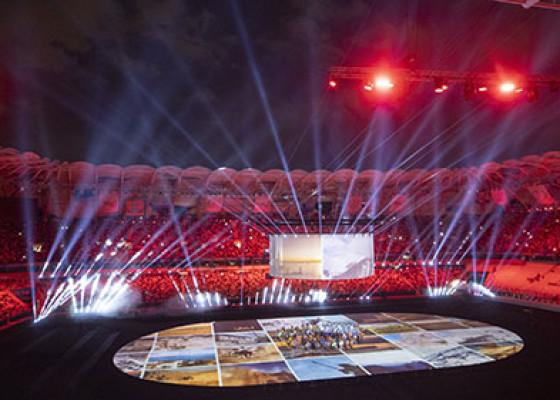 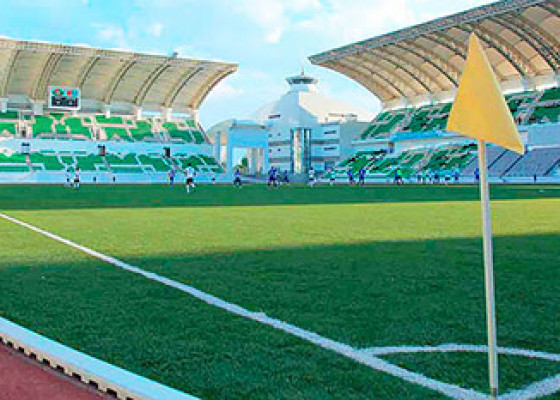 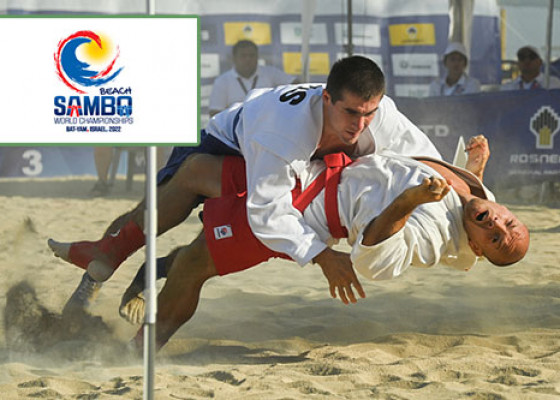 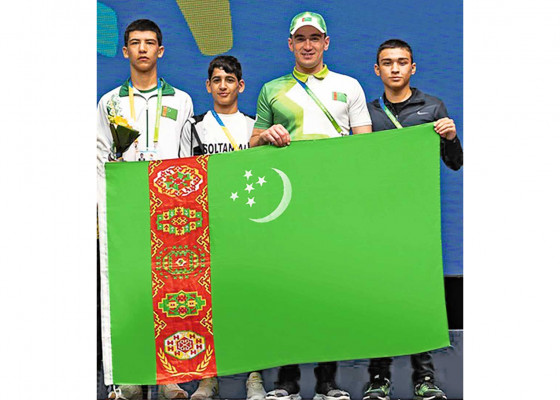 Children of Asia – the Beginning of Victories

Young Turkmen athletes showed excellent results at the 7th Children of Asia International Games, which were held in Vladivostok. The Turkmenistan national team won 16 medals (2 gold, 3 silver and 11 bronze ones) at the magnificent sports festival. Our compatriots won 2 medals in the athletics tournament (a gold medal in the 3,000-metre run and a bronze medal in the 1,500-metre run) and a silver medal in the table tennis tournament. Wrestlers brought 13 more medals to the treasury of the Turkmenistan team. The Turkmen team took the tenth place in the team event. This is a great international success for the young athletes of our country in the year “The Era of the People with Arkadag”. 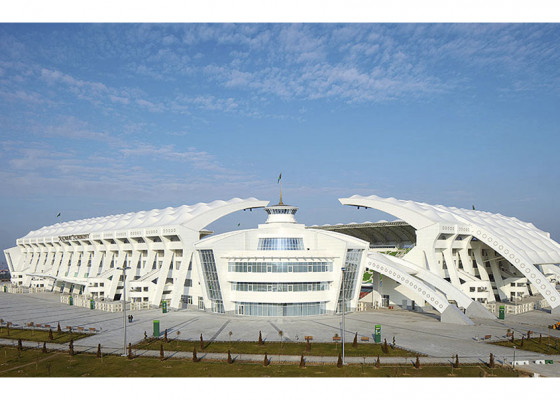 Sport is the harbinger of peace 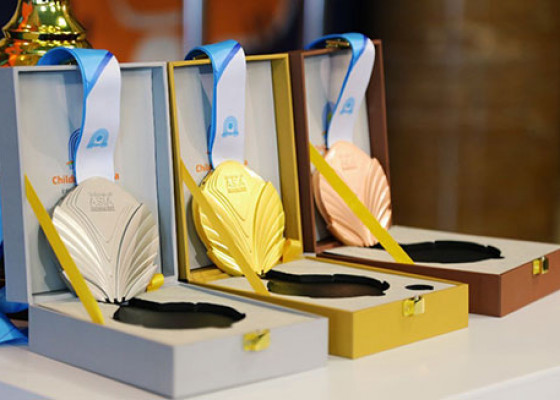 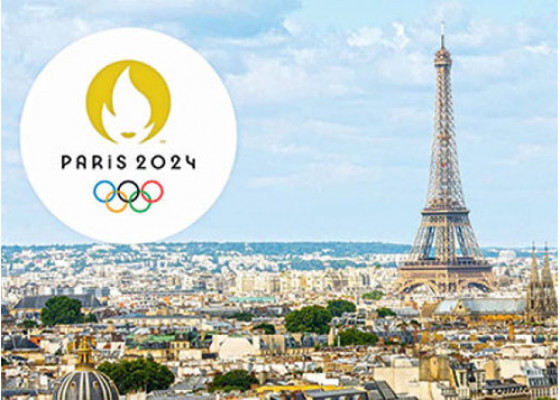 Paralympic athletes of Turkmenistan are preparing for Paris 2024 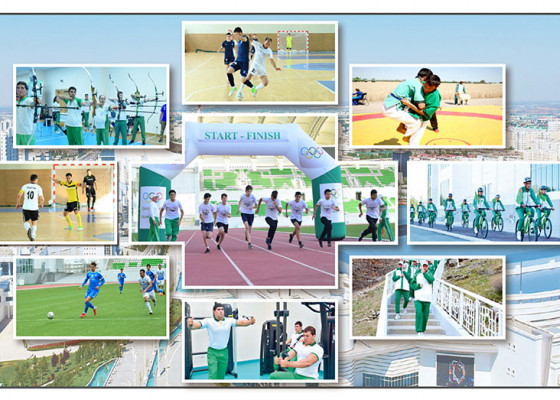 The origin of successful performances

The national championships in different sports provide an excellent opportunity to check the level of the athletes of the sports school 3 of the Ashgabat Main Department on Sports and Youth Policy. The brilliant results of the young people indicate the successful work of their coaches. It should be noted that such results and the high level of young athletes are achieved thanks to the sports policy and the initiatives of our Hero-Arkadag Gurbanguly Berdimuhamedov and the President of Turkmenistan Serdar Berdimuhamedov. Thus, the results of that positive policy are reflected in the achievements of our compatriots at the international sports events. As is known, the number of victories won by the Turkmen athletes at large sports festivals, which have been held since the beginning of May after the health-related break, is impressive. Achievements of our compatriots at the Asian Judo Cup (Almaty, Kazakhstan), at the U17 international Greco-Roman freestyle wrestling event (Bucharest, Romania), at the Asian Alysh Wrestling Championships (the Kyrgyz Republic), at the Asian Sambo Championships (Jounieh, the Republic of Lebanon), at the large weightlifting events, at the World Belt Wrestling Championships, and at the Silk Way Rally 2022 (the Russian Federation) are enough to prove the above-mentioned fact. The performances of our football team at the U23 the Asian Champion 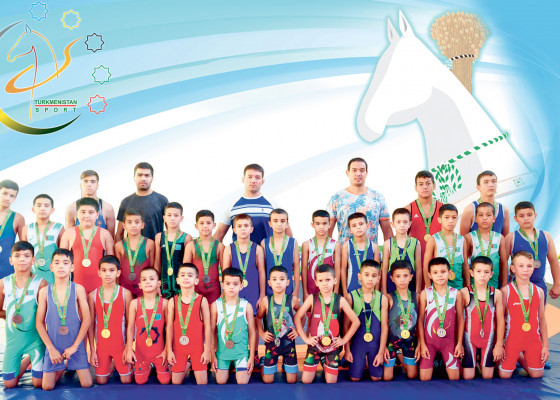 Impressive work is underway to attract young people to sports in our beloved Motherland. In this context, competitions in different sports are of great importance in encouraging children to do sports. The work of the sports schools, which have ample opportunities to hold such competitions, increases the enthusiasm of children. On July 25 – 30, a Greco-Roman wrestling tournament ‘Hazar deňziniň duşuşyklary’ was held in Turkmenbashi. The athletes from the sports school 5 of the Ashgabat Main Department on Sports and Youth Policy, coached by A.Geldiyev and M.Soltanov, took part in the event. The young athletes performed successfully in their weight classes and repaid the trust of their coaches. 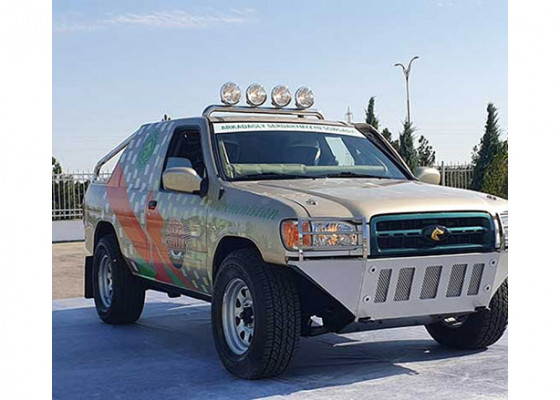 «7/24. tm»,&nbsp;№ 32&nbsp;(115), 08.08. 2022 On August 3, 2022, a solemn ceremony in honour of the participants of the Silk Way Rally-Raid 2022 and the members of the national team who performed at the Youth and Junior Asian Weightlifting Championships took place in the Avaza national tourism zone. 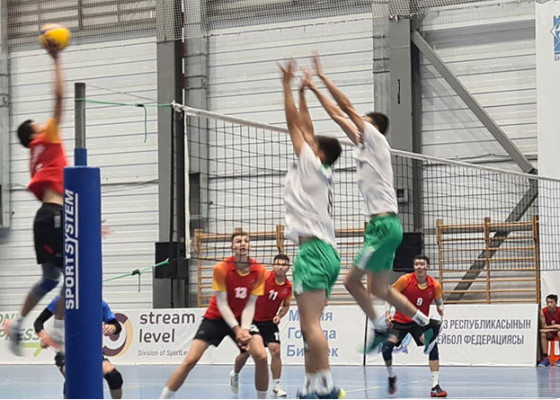 Silver medals of the Turkmen volleyball players at the international event 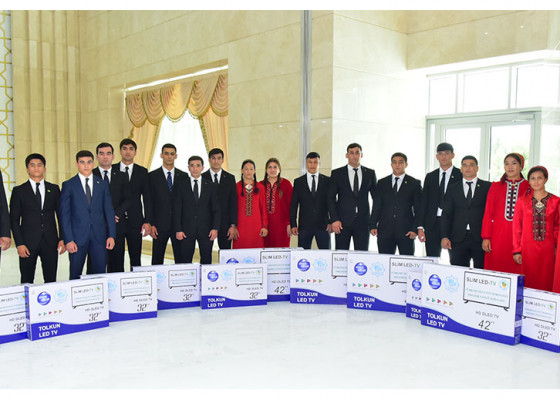 A solemn ceremony for athletes

A solemn ceremony for the athletes who won medals at the World, Asian Championships and international events was held in the conference hall of the Ministry of Sports and Youth Policy of Turkmenistan. First, the leading sports experts and coaches of the country made their speeches at the ceremony. They highlighted the impressive development of the sports system in Turkmenistan. The participants emphasized the importance of the 2025 World Sambo Championships to be held in the Turkmen capital. Their speeches were very informative. Hajy Rahmanov, the head of the Athletics Federation of Turkmenistan, offered the heartiest congratulations to the athletes and emphasized that they will achieve great success in the future. 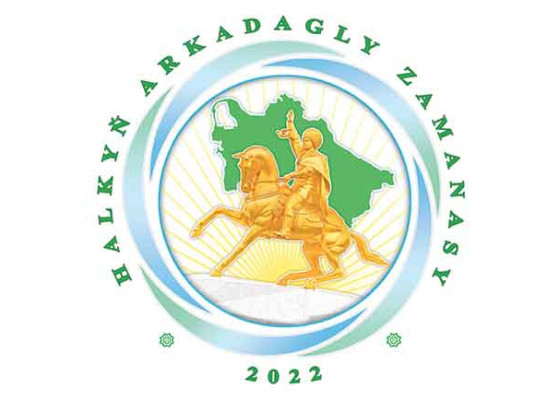 The Glory of the Motherland is Growing With New Sport Achievements

Honouring the Winners of International Tournaments On the instructions of President Serdar Berdimuhamedov, a ceremony to honour athletes who had won prizes in recent major international competitions – the Silk Way Rally Raid-2022, held in the Russian Federation, and the Asian Weightlifting Championships among juniors and youth, held in the capital of the Republic of Uzbekistan, the city of Tashkent, last month – was held in the Avaza national tourism zone.