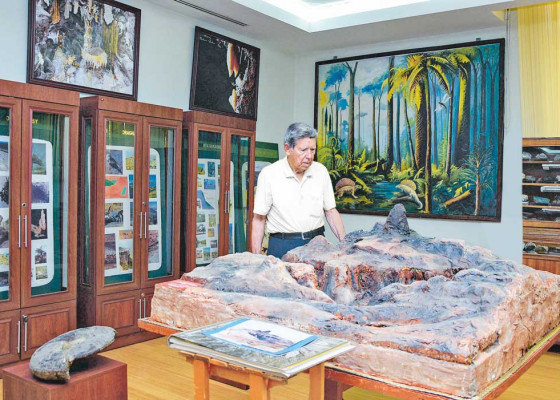 Rare Specimens of Minerals as a Gift

The geological scientific and educational collection of Magtymguly TSU has been replenished with a new showcase, where rare specimens of minerals from a private collection are exhibited – this is a gift to the University from the teacher, Candidate of Geology and Mineralogy and head of the museum Anatoly Bushmakin. The uniqueness of the new exhibits lies in their beauty, unique form and rare occurrence in nature of such forms, combinations and patterns in stone. Some items were found on the territory of Turkmenistan. The rest is from different parts of Eurasia, Russia, the Kola Peninsula in particular, and the Caucasus. There is native copper from the Urals, lazurite from the Pamirs, salt from Karabogaz Köl, all kinds of fossilised forms of marine organisms, concretions – a mineral outgrowth around an organic base, and secretions – residual holes in a rock, inside which crystals of quartz, barite, or calcite, called geodes, develop, native sulphur, witherite, gypsum, selenite, Ural malachite and ... Turkmen malachite. Yes, do not be surprised, according to the geologist, there are five manifestations of this stone in the country, including those in Koytendag. Visitors can also see semi-precious lazurite, sintered forms from the karst caves of the Kapkutan system (Koytendag etrap), quartz geodes from the Tuarkyr upland and the mountains of the Great Balkhan 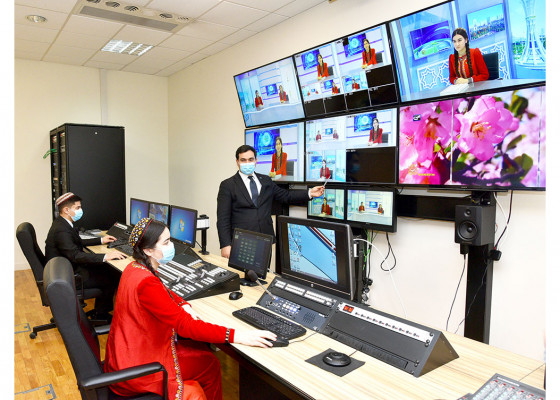 The youth — the future of our country

Under the leadership of our He­ro Ar­kadag in the Epoch of Might and Happiness rising to the new heights of development, of reforms the material and spiritual values of the Turkmen people, is in accordance with natural laws. Because our people inspired by the bright happy future and successful achievements of our powerful state go forward with confidence at the speed of a racer to the glorious future. Under the wise and far-sighted leadership the care for people became one of the primary trends of the state policy. In our Motherland going forward towards new heights of development the young generation of our Motherland get education in accordance with the demands of our times, the achievements of new technologies are introduced into the life the youth. As our Hero Arkadag teaches the works carried out in this direction are realized based on national traditions and wisdom. Our He­ro Ar­kadag underlines: «In order to achieve bringing up our youth well educated and of high culture, with the aim of achieving their deserved contribution to the treasury of the world science, technology and culture all conditions should be created. Leaning upon the science and education, on the basis of ancient traditions of the Turkmen people and universal human values all the works of educating and bringing up the youth should be improved». 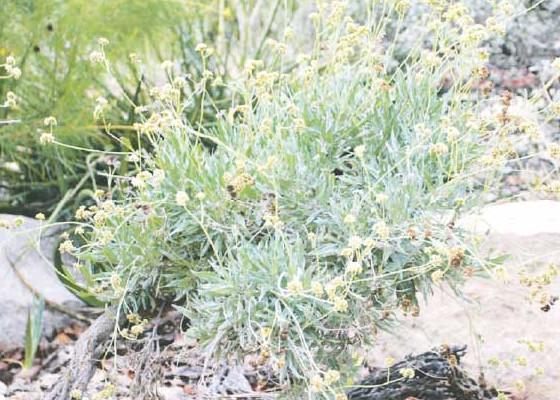 In the Department of Nature and Local Lore at the State Museum of the State Cultural Centre of Turkmenistan, herbarium specimens of plants, collected by famous botanists collectors N. Androsov and E. Chernyakovskaya in the 1930-50s, are kept. In this collection, an herbarium leaf with a very interesting plant called guayule, which is native to North America, was found. According to the data described in the inventory books of the Museum, this plant was collected by Nikolai Androsov in the Ashgabat Botanic Garden in 1939. How did this plant get to Turkmenistan? The question caught the interest of the Museum’s researchers. 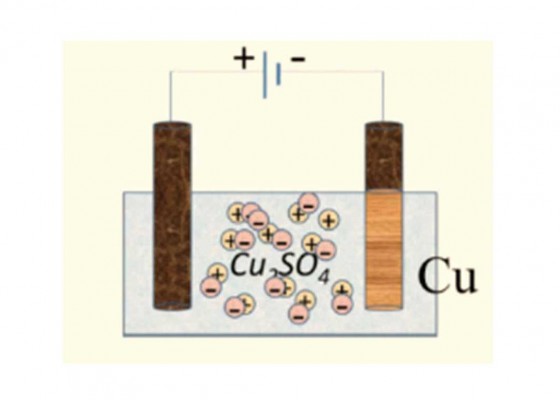 The formation of electrochemistry, or, in other words, the invention of chemical and electrical forms of energy, dates back to the ancient Parthian and Merv centuries. We can predict that our ancestors stored the vine and vinegar in clay or metal vessels. They saw that if you put one metal scoop in another metal container with zinc, chemical reactions occur before they come into contact. We assume that most of the alchemists lived in Turkmenistan. Because our homeland is rich in chemical elements, such as sulfur, iodine, bromine, silver, copper and others. 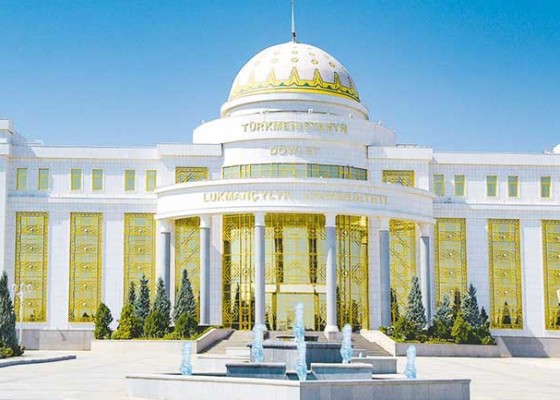 Moving along the Path of Progress

To bring domestic science to a qualitatively new, world level, to increase the efficiency of research and technological developments and to focus them on addressing the pressing issues of the life of the state and society are the main tasks set by the President before Turkmen scientists and the entire society. The priority areas of the development of Turkmen science include the protection of health of the Turkmen people that the leader of the nation views as a factor of national security and a strategic goal of the national health sector. Today, employees of the research centres, affiliated with the Ministry of Health and the Medical Industry and the Academy of Sciences, and the Research Centre at Myrat Garriyev State Medical University are developing this area of science. 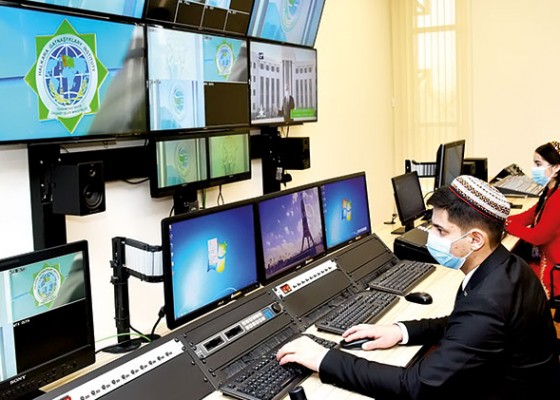 Formation of a comprehensively developed young generation with deep knowledge and a broad outlook, training of highly qualified personnel capable of thinking in a new way are the priority tasks of state policy in modern Turkmenistan. Now, when special attention is paid to the intellectual development of the nation, there is a wide opportunity for the young generation to receive high-quality education and conduct fruitful scientific and educational activities. In the year of «Turkmenistan — Homeland of peace and trust», our country is celebrating the 30th anniversary of Independence with great achievements in the sphere of education. A large-scale scientific activity is carried out at the Institute of International Relations of the Ministry of Foreign Affairs of Turkmenistan, the development of which is paid special attention by our esteemed President Gurbanguly Berdimuhamedov. Speaking at a meeting on foreign policy and diplomacy, which was held on February 9 of this year, the President of Turkmenistan noted the particular importance of the tendency for in-depth study of new directions in political science, the implementation of scientific research on topical issues of foreign policy of Turkmenistan. Moreover, the Head of our state instructed to continue active scientific activities, introduce modern information technologies into the educational process and organize on an o

Exhibits Tell about the Geological Past of the Earth

The Museum of Magtymguly Turkmen State University is a large repository of the material archive of accumulated geological knowledge. The collection has a historical value and also allows to include already collected and partially studied material in new scientific research and to attract experts who are more competent in narrow applied scientific fields and directions. The museum provides methodological assistance and consults students in carrying out scientific work on this topic. There, the natural remarkable sight of the Gaurdak-Koytendag region is reflected in the model “Traces of the Hojapil Dinosaurs” with a three-dimensional image of a predatory tyrannosaur, made at a scale of 1:2 from the life-size of the animal and accompanied by a photo stand explaining the process of creating the display. There are plaster casts of traces of the Jurassic lizards, as well as a replica of the Kunyaurgench meteorite kept in the State Museum of the State Cultural Centre of Turkmenistan. It is considered the largest of all the fireballs that fell to the territory of the CIS.

Miras Magazine: View of scientists on historical and cultural heritage of Turkmen nation

Regular issue of quarterly scientific and popular Miras Magazine, which is published by Magtumguly Institute of Language, Literature and National Manuscripts of the Academy of Sciences of Turkmenistan, has been released. Addressed to wide reading audience, the issue continues series of articles about discoveries and results of study of spiritual heritage of the nation. The content of new issues of the magazine includes articles of historians and archaeologists, ethnographers and cultural, language and literature scientists.

Innovative projects for the digital economy

On the eve of the National Science Day, a multi-stage exhibition of scientific and technical creativity of students was held at the Institute of Telecommunications and Informatics of Turkmenistan in the form of a traditional competitive event, within the framework of which 85 projects were initially presented. Many of them, from the point of view of the further implementation of valuable experimental ideas in innovative digital production, are of promising interest. This is what Begench Annayev, deputy chairman of the Council of Young Scientists of the Institute, fourth-year student of the Faculty of Radio Technologies of Communication, emphasised in an interview to our newspaper, “Such exhibitions of students’ scientific creativity give them an opportunity to demonstrate their innovatory developments created under the experienced supervision of teachers. All these projects will be further developed at subsequent stages of work. It is also important that the organisation of such expositions contributes to the visual demonstration of students’ scientific priorities in their innovative activities.”