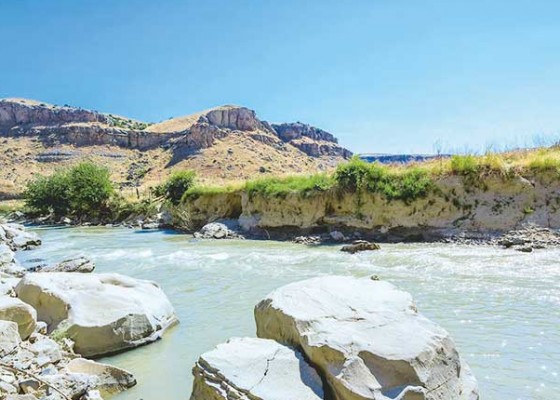 Filled with Echoes of Ancient Times

The valley of the Sumbar River is an unusual place in Turkmenistan that attracts like a magnet with its natural monuments and amazing beauty of nature. Magtymguly etrap, Balkan velayat, is a kind of centre of the Sumbar valley. For example, one of such attractions is Uch-deshik cave, or, as it is also called, Sheripe, located on the right bank of the Chendir River on a steep hill about 30 metres high. The curtain of the stream falls from a wide stone ledge in a scattering of silver spray. Many legends are associated with that place. 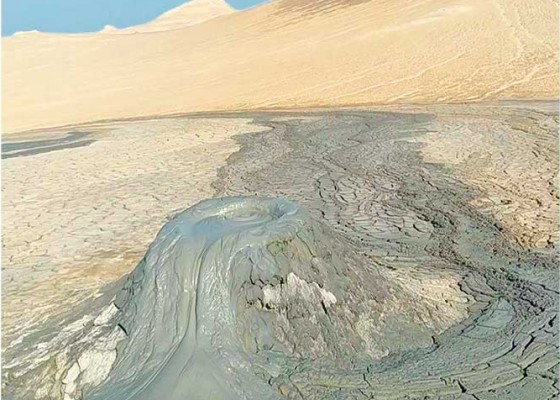 There are many fascinating places in the world that make people enchanted by the beauty and harmony of nature. Undoubtedly, one of such corners of nature is a mud volcano called Akpatlavuk, whose name is translated as White Volcano. It is located in the so-called South Caspian depression in south-western Turkmenistan, where almost half of all mud volcanoes of the world are located. There are more than 200 of them in the region, and about 30 volcanoes are located in the territory of Turkmenistan. Their number varies depending on the activity of the bowels of the earth. For example, a new mud volcano appeared in Turkmenistan’s water area of the Caspian Sea in 2017. Akpatlavuk is located between the villages of Ekerem and Esenguly in the Balkan velayat. This natural wonder is one of the highest and most active volcanoes in the region. It arouses fascination with its grandeur; its height is about 80-90 metres. The road to the volcano runs along a deserted off-road. After arriving at the foot of the mountain, we climbed its slope, where various shrubs and herbs, such as harmala, wormwood and other plants used in folk medicine grew. The scent of these herbs can be dizzying with a variety of aromas. 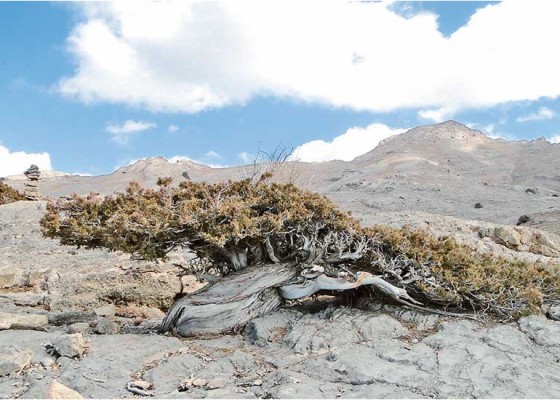 Rocks, wind, snow, low temperatures and oxygen deficiency make the mountain peaks difficult to reach. But despite this, people have been striving to conquer them since ancient times. Is this why mountain peaks are revered as places of patience and endurance, spirituality and holiness? For example, Mount Kailash in India, Mount Fuji, Mount Sulaiman-Too in Kyrgyzstan, Mount Khan Tengri in Tianshan on the border of three states, Kazakhstan, Kyrgyzstan and China, and Mount Ararat that Armenia and Turkey associate with their culture. Likewise, the top of the Koytendag ridge – Mount Ayry-baba is not only the highest point of those mountains and Turkmenistan (3,139 metres above sea level), but is also is a sanctuary revered by local people. When approaching the Koytendag Mountains, the summit can be seen for hundreds of kilometres away. It can be seen in snow and cumulus clouds, in fogs and under a bright sun, in any weather. Its majesty is so attractive that you cannot take your eyes off. In winter, those places are covered with snow, some niches have the ice cover ten metres thick. In summer, standing on the summit, you can admire goats and mountain rams grazing in the mountain meadows and watch the birds of prey soaring at lower altitudes. In early spring, and sometimes even in February, the rare Crocus korolkowii blooms there at the edge of the melting snow. Though there are pea 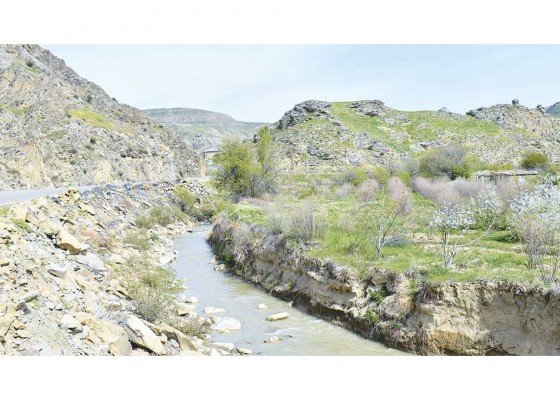 Oasis around Mounts Syunt and Hasar

Protected by two ridges of Mounts Syunt and Hasar, the valley of the Sumbar river is a wonderful corner of nature. The endlessly long Aydere gorge, partly included in the Syunt-Hasardag State Nature Reserve of the Ministry of Agriculture and Environment Protection of Turkmenistan, stretches there. The river of the same name, repeating the bends of the canyon’s sides, has a fast and stormy current, many small waterfalls – the most beautiful one can be found in the side gorge of the Sumbar valley called Gochdemir, and also rapids, rifts, chutes and shallow areas where moisture-loving and aquatic plants cling to the walls. Walking along this wide corridor, you can imagine yourself in a botanical garden, looking at the tall elm trees, which in the East are called karagach. These fast-growing light-loving deciduous giants are able to withstand cold and heat equally well. The tree adorns both the south and the north of the country, thus attracting the attention of gardeners and ecologists. There, low trees of Acer turcomanicum coexist with thickets of barberry and wild rose, rare wild-growing trees of Malus turkmenorum and Pyrus boissieriana are hidden in the thick of the forest. The place near the water is occupied by walnut trees and white-trunked plane trees, wild grapes and lush blackberry bushes “cling” to smooth rocks, and fig and cherry plum trees have chosen the dry

Parrots Live in the Parks of Ashgabat

For many decades, sparrows and ringdoves have been the habitual birds inhabiting the courtyards, public gardens and parks of Ashgabat. Each morning began with the cheerful chirping of joyous sparrows making a fuss in the courtyards and on flowerbeds and the clanging of modest, delicate ringdoves that fearfully took off frequently flapping, gained height, spreading their wings and tail, and landed thrown by Ashgabat well-wishers. When multi-storey buildings appeared in the capital, an increasing number of wild blue pigeons settled down in the attics and empty roofs of high-rise buildings. In the early 2000s, exotic common mynas. In spring and autumn, other birds can be seen in the city; they stop for rest and feeding during the flight. The desert species of avifauna can fly from the Karakum Desert to feast on flowers of the maclura and mulberry fruits. However, all these birds of the local or migratory feathered fraternity have long become familiar; their appearance, sounds of voices and habits have become easily recognisable.

In the Neighbourhood of “the Crocodiles of the Desert”

I spent my childhood up to 12 years in the desert, among salty takyrs and saxaul thickets. Nature was right in the palm of my hand – its riches, beauty and diversity were a gift for us, children, and the changeable weather of the Karakum Desert was something like a school of life and helped us grow up. The memory retained many meetings with different animals inhabiting the sandy hills, and each time it was a small, personal discovery for the boys who were always ready for new impressions and experiences. One story is about the desert monitor lizard, or zemzen in Turkmen – one of the most fascinating representatives of the fauna of Turkmenistan, an important element of natural ecosystems and a species that maintains the balance and regulates the numbers of rodents and other small animals. Nature has given it the most remarkable appearance among the inhabitants of the Karakum Desert. It is also called “the crocodile of the desert”, however in fact, it is just a large lizard with a head on a massive neck, a gaze of eyes protected by thick separate eyelids and a movable forked tongue. If you disturb the reptile, it begins to hiss menacingly and takes on a frightening look. The strong tail is its adornment and weapon.

Water is a valuable property

Our ancestors respected and rationally used water resources. Water is a primary necessity not only in the lives of people, but also in the lives of plants and animals. In this regard, our ancestors created numerous proverbs, such as «A drop of water is a grain of gold», «Soil is a treasure, water is a diamond», «Water decorates the earth, the swan decorates the water», «Water places are beautiful, waterless places are a desert» and we tried to observe them. This approach is due to the environmental conditions and the acute shortage of water for our people. That is why our people followed the traditions of farmers and could have a plentiful harvest with less water, could provide themselves with a normal way of life. They have gained valuable experience in the use of rainwater. Our wise forefathers, having gained valuable experience in the construction of water structures since ancient times, built such wonderful irrigation structures as the dam, jykyr, well, kariz, sardoba. They built Soltanbent, Gowshutbent in Murgap, Garribent on the Tejen River. They could water the arable land by raising the water higher with the help of dams. Our people used jykyr in the Dashoguz region and the Amuderya region to irrigate medium-sized arable land. They built a kariz to irrigate arable land in the mountainous areas of Ahal. Kariz is an underground irrigation facility made by hand, wh

United by understanding the importance of a multifaceted and systemic dialogue on the development of the Caspian region, the five coastal states – Turkmenistan, Azerbaijan, Iran, Kazakhstan and Russia – are again preparing for a meeting already at the Second Caspian Economic Forum to determine further prospects for international cooperation in the Caspian region. The forum is to be held in Moscow in August this year. During two days, various discussion platforms will discuss the development of trade and economic relations among the states of the Caspian region, interaction in the fields of transport, infrastructure, energy and ecology. Cooperation with the Caspian states is one of the main priorities in the foreign policy of the President of Turkmenistan. Turkmenistan backs up important political decisions taken at the highest level with specific mutually beneficial projects that meet high international environmental standards. Historical Prologue 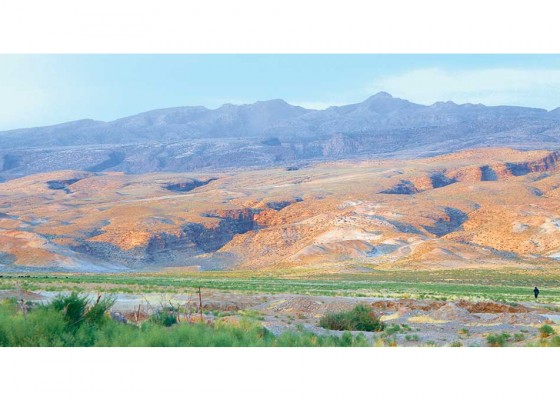 In the Land of Deep Canyons

Turkmenistan is the land of the most ancient civilisations, its centres of culture and agriculture of different time periods are an archaeological Klondike for the representatives of the scientific world. The very beautiful natural landscapes with a contrasting microclimate and unique nature, where ecosystems of mountains, deserts and the sea coexist, “breathe” with history. The Koytendag Mountains, a land of legends, unique natural monuments and distinctive traditions, attractive in the ecological, scientific, geological, historical, cognitive and aesthetic terms, have many notable natural attractions. The word “Koytendag” means “mountains of deep canyons”. There, the highest mountains in the country with deep lakes and long karst caves are located. The natural beauty of those places is mostly protected within the Koytendag State Natural Reserve of the Ministry of Agriculture and Environment Protection of Turkmenistan.