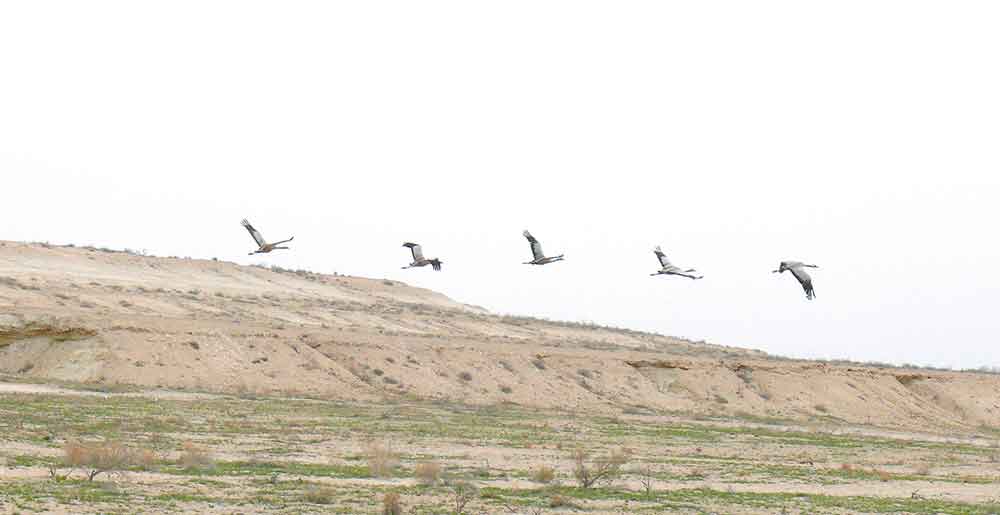 In the north of Turkmenistan, there is a kind of green-blue oasis among the desert steppes with channels and collectors connecting the lakes, around which separate ecosystems, “islands of life”, surrounded by coastal shrub vegetation, have formed. The total area of the water basin of one of the largest lakes in the country, Zengi-Baba, is 2,470 hectares, it was formed as a result of filling the depression at the north-western side of the hill of the same name with collector-drainage waters coming from the agricultural areas of the Dashoguz velayat. The maximum depth in the eastern part of the reservoir reaches 16 metres. On the northern side, the Kangakyr upland adjoins the reservoir with a chink steep descent. The southern and eastern banks are gently sloping, on their sandy areas xerophytic vegetation, black saxaul woods and wormwood communities with the participation of saltworts, grows. Besides, in some places, there is the tamarisk and camel thorn, and reeds are well developed closer to the water. There is no permanently residing population in those places; distant-pasture animal husbandry is developed to a small extent.ö

Pirli KEPBANOV,
Director at the National Institute of Deserts, Flora and Fauna, Ministry of Agriculture and Environment Protection of Turkmenistan, Candidate of Biology. Photo: the author