Lake under the Vaults of the Cave 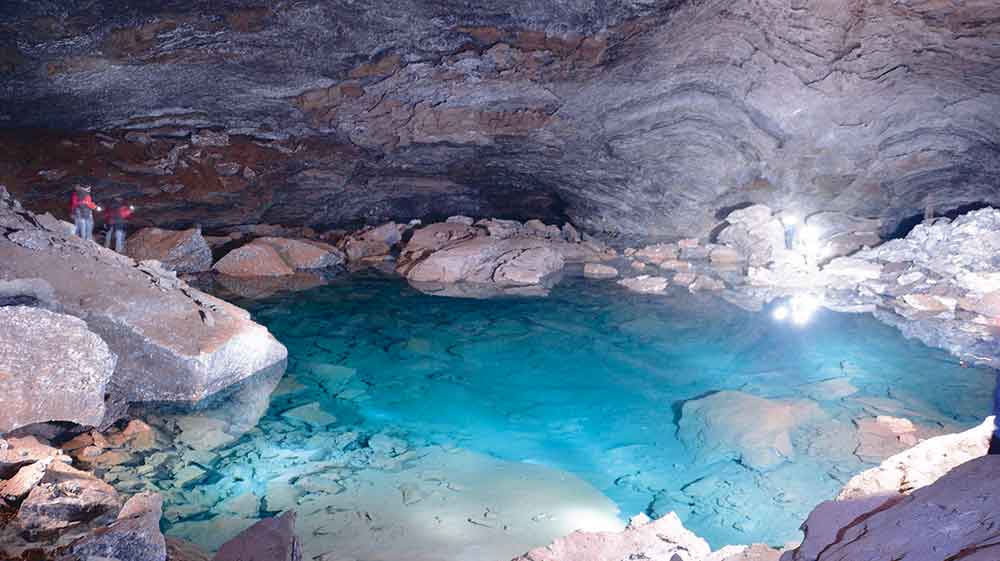 An underground lake with a length equal to a football field was discovered accidentally in the Koytendag Mountains six years ago. To be more precise, the water level of the underground hydraulic system dropped so much that the water receded from the upper horizons and released a new underground “double” hall, the ceiling of which was partly the bottom of a vast depression, in which water used to appear on the surface. Now, the entrance to the caves is an impressive land subsidence with a diameter of 100 metres and a depth of 50 metres. The discoverers dedicated the discovery to a caver from Gaurdak, speleo-diver and explorer of the Koytendag caves Igor Kutuzov.

The examination of the newly formed cavity revealed the first “dry” hall 45 metres long and the second, spacious hall 125 metres long, with a lake, the clear water of which allows you to see the bottom at great depths. The maximum ceiling height is 25 metres. The karst lake is notable for being part of an underground hydraulic system and, in accordance with the principle of communicating vessels, it keeps one water level or “horizon”. That is why the lake “breathes”, the level of its water “mirror’” fluctuates – it goes up and down, depending on the season of the year. According to the initial results, the length of the reservoir is 87 metres, the width is 62 metres and the total area is 4,400 square metres. This is the largest water reservoir in the country and in the territory of the CIS, located in a cave, which exists due to melt water and rainfall runoff. Its bottom is gaining in depth from the west to the east – there the beam of the lantern is lost in depth and the ceiling goes under the water, so that the following corridors are flooded with water, but the so-called “siphon” part of the lake may turn out to be of significant length.